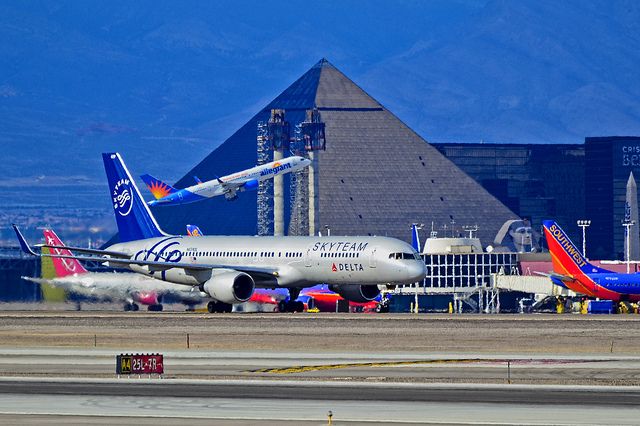 McCarran International Airport (IATA: LAS, ICAO: KLAS, FAA LID: LAS) is the primary commercial airport serving the Las Vegas Valley, a major metropolitan area in the U.S. state of Nevada. It is in Paradise, about 5 miles (8.0 km) south of Downtown Las Vegas. The airport is owned by Clark County and operated by the Clark County Department of Aviation. It is named after the late U.S. Senator Pat McCarran, a member of the Democratic Party who contributed to the development of aviation both in Las Vegas and on a national scale. LAS covers 2,800 acres (11.3 km2.) of land.

McCarran received over 45,300,000 passengers in 2015, a 5.8% increase over the previous year but still below pre-recession levels. It is the 26th busiest airport in the world by passenger traffic and the 8th busiest by aircraft movements. The airport has nonstop air service to destinations in North America, Europe, and Asia. It is an operating base for Allegiant Air, as well as a crew and maintenance base for Frontier Airlines, Southwest Airlines, and Spirit Airlines.

The distance from Las Vegas Airport, United States to Cancun Airport, Mexico is 3210.58 kilometers or 1994.96 miles.