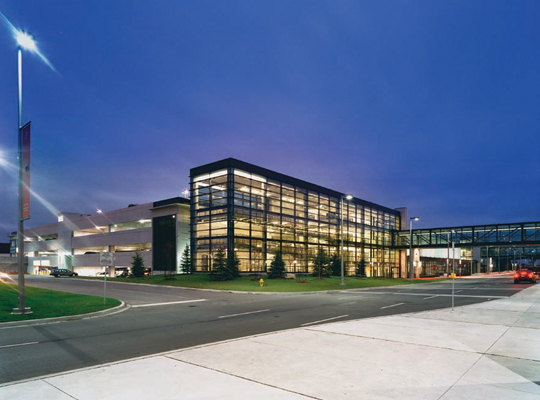 Ottawa/Macdonald–Cartier International Airport or Macdonald–Cartier International Airport, (IATA: YOW, ICAO: CYOW) in Ottawa, Ontario, Canada is an international airport named after the Canadian statesmen and two of the "founding fathers of Canada", Sir John A. Macdonald and Sir George-Étienne Cartier. Located in the south end of the city, 5.5 nautical miles (10.2 km; 6.3 mi) south of downtown Ottawa, it is Canada's sixth-busiest airport, Ontario's second-busiest airport by airline passenger traffic, and Canada's sixth-busiest by aircraft movements, with 5,110,801 passengers and 150,815 aircraft movements in 2018.The airport was the home base for First Air. The airport is classified as an airport of entry by Nav Canada, and is staffed by the Canada Border Services Agency. The airport is one of eight Canadian airports that have United States border preclearance facilities. The airport used to be a military base known as CFB Ottawa South/CFB Uplands. Although it is no longer a Canadian Forces Base, it is still home to the Royal Canadian Air Force's 412 Transport Squadron, which provides air transport for Canadian and foreign government officials.